Oral health is an important part of a person’s overall health and wellbeing. The health of our teeth and gums affects our ability to speak, eat, and communicate, and it can also impact our self-esteem, school or work performance, and social life.

Poor oral health can cause immense pain and significant functional problems. It can be costly for individual patients, insurers, and the general public. Unfortunately, however, oral health problems are a relatively common experience.

More than 80% of people in the United States have had at least one cavity, and more than 40% of adults have felt pain in their mouth in the last year alone. In fact, the Centers for Disease Control and Prevention claim that the Baby Boomer generation (those born between 1946 and 1964) will be the first in which a majority of people keep their natural teeth over their lifetime. Poor oral health is also linked to chronic diseases, including diabetes and arthritis.

Some groups are at a greater risk of oral health problems than others — adults with less than a high school education experience tooth decay and gum disease at nearly three times the rate of those with at least some college.

On average, adults living in the North Country are less likely to maintain regular dental appointments than adults in other areas of New York State. 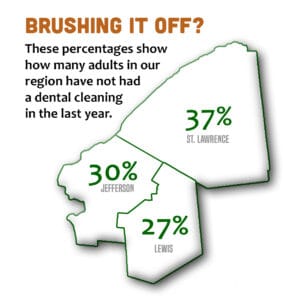 Nearly 1 in 3 adults in our region reports not visiting a dentist for a routine cleaning within the past year, including 30% of adults living in Jefferson County, 37% in St. Lawrence County, and 27% in Lewis County.

Furthermore, 22% of North Country adults say they have not been to a dentist for a routine cleaning within the past two years, and 13% say it has been five years or more since their last dental cleaning.

Although Jefferson County has more dentists per person than the statewide average, both Lewis and St. Lawrence counties have less than half as many. In fact, Lewis County is listed as a Dental Health Professional Shortage Area for all populations, and Jefferson and St. Lawrence counties are both listed as shortage areas for low-income populations.

When untreated tooth decay in children was last measured, in 2011, the region’s three counties greatly exceeded the statewide rate of 24% — ranging from 30% of children in Jefferson County to 40% in St. Lawrence County and 51% in Lewis County.

Our region’s relatively poor oral health can also be seen in hospital emergency rooms. Between 2005 and 2015, the rate of emergency department visits for untreated tooth decay increased by 105% in Lewis County, 148% in Jefferson County, and 161% in St. Lawrence County.

Fortunately, most oral health problems are preventable. To maintain healthy mouths and strong teeth, families should follow the suggestions below — and teach their children to do the same.