The Alexandria Bay Fire Department is pleased to present a free country music concert starring singer Kevin Davison. The concert will begin at 7:00 p.m. on Friday, May 17th at the village fire station, 110 Walton Street. 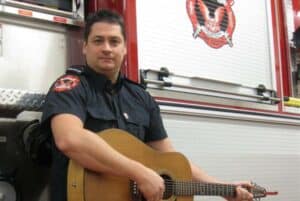 Jumping into the music scene with both cowboy-booted feet in 2009, Kevin found himself in Nashville within a year in recording sessions with some of the best musicians in North America. With a career as a paramedic in his small hometown of Kentville, Nova Scotia, under his belt, Kevin has recently made the switch from full time paramedic to a full time musician. He has dedicated his life to helping others while always carrying a tremendous passion for music and life’s journey has brought Kevin to a place in time where music is taking a front seat.

Davison has had a whirlwind year, from performing at the late Const Wynn’s funeral in Alberta for 8000+ first responders, the Prime Minister and a television viewership of over 5 million; to hitting the Cavendish Beach Music Festival stage in Charlottetown, PEI, as 1 of 6 finalists for the Canadian Country Music Associations Discovery Atlantic Program.

His first single from his latest album, Only Human (released April 30th, 2015) was added to over 45 mainstream stations nationwide, and he has been featured on numerous radio stations, and television broadcasts – from Canada AM to CTV News and what seems like everything in between.