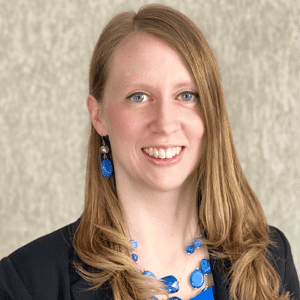 Joanna Loomis joined the North Country Initiative (NCI) team in 2018 as Director of Provider Strategy and Transformation, and in 2021, she assumed the role of NCI Deputy Director.

Previously, she served as the Executive Director of the Watertown Urban Mission, where she provided leadership and oversight to its seven major programs, which provide basic needs and empowerment to individuals and families in need in greater Jefferson County. She has also served as the Mission’s development director and critical needs coordinator, and as a child protective services caseworker with the Jefferson County Department of Social Services.

Joanna has a M.A. in social and public policy from SUNY Empire State College and a B.A. in philosophy from St. Lawrence University. After completing her undergraduate degree, she lived in New Delhi, India, where she taught English in a public school as part of a Fulbright grant.

Joanna has served as a co-president for the North Country Council of Social Agencies, is a director on the boards of the North Country Family Health Center and North Country Prenatal-Perinatal Council, a member of the Northern New York Community Foundation’s LEAD Council and Watertown Noon Rotary, a graduate of the Jefferson Leadership Institute, and continues work with the region’s emerging Bridges Out of Poverty initiatives. Joanna is a Lean Six Sigma Green Belt and is certified through the National Committee for Quality Assurance (NCQA) as a Patient-Centered Medical Home Content Expert (PCMH-CCE).

Joanna lives in Henderson with her husband, two children, and terrier mix.