When most North Country residents hear about the Fort Drum Regional Health Planning Organization, they naturally think about soldiers, military families, or the U.S. Army base here in Jefferson County.

We are proud of this association. FDRHPO was founded more than a decade ago to connect Fort Drum soldiers and families with quality healthcare in the North Country, and we are still dedicated to this goal today. However, our work extends beyond Fort Drum, as we work to strengthen the System for Health for all individuals living in Jefferson, Lewis and St. Lawrence counties — civilians and soldiers alike.

What is a System for Health?

A System for Health engages all aspects of the community to promote health and wellness, prevent illness and injury, and provide the highest quality care when and where necessary. It aims to do this while positively affecting the behaviors of citizens and the environments in which they live, work and play.

We do much of our work “behind the scenes” — surveying residents to understand local needs, strategizing with healthcare partners to find solutions and securing necessary resources to help make those solutions a reality.

Our initiatives span the healthcare spectrum. We help residents prevent and manage chronic disease; we help recruit and retain medical professionals to strengthen our region’s healthcare workforce; and we help expand access to care for patients with mental illness to make sure they receive the services they need in our community.

Whatever we are involved in, we’re thinking about the future. Our success is not measured day-to-day, but rather it is shown as we begin to see the health of the North Country improve from generation to generation. We are determined to make the North Country a healthier community.

Want to download and print a copy of this document? Click here to open it in a new window. 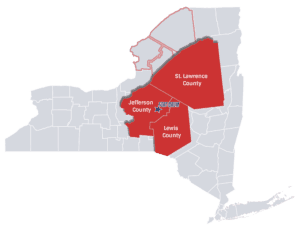 Starting from the northwest on the picturesque waterfront of Lake Ontario and the St. Lawrence River, our region stretches southeast across the rolling landscape of the Tug Hill Plateau and into the rugged beauty of the Adirondack Mountains. Scattered throughout the tri-county area are small waterways perfect for fishing and kayaking; forests for hiking, hunting and observing nature; and rural communities with friendly neighbors, historic buildings and safe schools for children.

Also in our region lies Fort Drum, home to the 10th Mountain Division of the U.S. Army. As a close-knit member of our community for more than 30 years, Fort Drum is home to roughly 19,000 soldiers and their families — many of whom receive their healthcare in the surrounding communities.

In the mid-1980s, the U.S. Army made a conscious decision not to build a hospital on Fort Drum, but rather to integrate the military base with existing healthcare services in the surrounding community. With the reactivation of the 10th Mountain Division at Fort Drum in February of 1985, the installation became the only one in the U.S. with a division of soldiers that did not have a hospital. This decision laid the foundation for the unique “Fort Drum Model” of Healthcare, which FDRHPO continues to nurture today.

Fast-forward nearly 20 years to September 2004, when the 3rd Brigade Combat Team was established at Fort Drum. This team brought together six battalions, which meant that an influx of soldiers and military families would be moving to northern New York, where they would require healthcare. This influx would lead directly to the formation of FDRHPO in the following year.

FDRHPO began as a small steering committee of volunteers, bringing together community healthcare providers and Fort Drum’s Medical Department Activity (MEDDAC) to develop a model of care that met the needs of soldiers and civilians alike. Soon after, it became a Department of Defense 721 pilot program and received one-time base funding to allow its work to continue full-time.

Between 2009 and 2012, FDRHPO secured two pivotal grants for the North Country’s healthcare system. First came the “HEAL-NY 10” grant, a total of $6.7 million that allowed FDRHPO to implement electronic health records in medical offices throughout the region. This allowed five local hospitals and 48 practices and clinics to securely send and receive patient health information on one network. The second grant, “HEAL-NY 21,” provided $3.7 million to further connect local hospitals, setting up a system of shared services and governance among them.

2014: Formation of the North Country Initiative

The North Country Initiative (NCI) is a partnership of hospitals, independent physicians and community providers working together to reform the healthcare system across northern New York’s Jefferson, Lewis and St. Lawrence counties. NCI is a clinically integrated network with 18 healthcare providers on its board. It is also an Accountable Care Organization (ACO), bringing together local hospitals and providers to work as a team to improve the quality of care for Medicare beneficiaries and curb the rising cost of healthcare.

April of 2015 marked “Year 1” of New York State’s five-year Delivery System Reform Incentive Payment (DSRIP) program, which aims to fundamentally change healthcare delivery. In our region, FDRHPO has worked very closely with the North Country Initiative to bring together hospitals, primary care providers, behavioral healthcare providers, community based organizations and other stakeholders necessary to meet the goals of the DSRIP program. These objectives include increasing access to preventive and holistic care while reducing unnecessary visits to the emergency department. More about the DSRIP program can be found at northcountryinitiative.org/dsrip-program.

In the same year the DSRIP program took off, FDRHPO secured another major grant from New York State when it became one of 11 Population Health Improvement Program (PHIP) contractors. This program is complementary to DSRIP and encourages a multi-faceted approach toward increasing the health and wellness of all, including certain at-risk groups. FDRHPO’s PHIP team uses data collection, marketing, stakeholder engagement and other strategies to make improvements in our region’s rates of chronic disease, tobacco use, substance use, suicides, and other priority areas.

2015: Addition of the EMS Program Agency

Before 2015 came to close, FDRHPO celebrated another milestone in its history — taking over as administrator of the North Country EMS Program Agency. This acquisition was well-timed and well-received by the healthcare community, as it brought regional EMS priorities to the table for DSRIP discussions and other important healthcare transformation initiatives. The EMS Program Agency’s offices are located alongside FDRHPO’s to this day.

In 2017, FDRHPO became one of six recipients of the Linking Interventions For Total Population Health (LIFT Population Health) grant, awarded by the state Department of Health. Under this program, FDRHPO is responsible for implementing coordinated activities that focus on preventing and controlling obesity and diabetes in Jefferson, Lewis and St. Lawrence counties by January 2020.

In July 2018, FDRHPO unveiled a new regional initiative to improve vision health for diabetic patients in the North Country. The Telemedicine-Based Diabetic Retinopathy Screening Program uses state-of-the-art technology to capture a detailed image of a patient’s retina and securely send it to a participating ophthalmologist or optometrist for assessment. This is a breakthrough in screening at-risk patients for diabetic retinopathy – a condition in which high blood sugar levels damage blood vessels in the retina, leading to vision disorders and blindness.

FDRHPO is continuing its longstanding commitment to build a patient-centered System for Health for all living in the North Country. Please stay tuned for more updates as time passes!